And this is what made me want to spend some days mentioning some awesome folks...

It's time for a COVER REVEAL!

GRAVE INTENTIONS by the AWESOME Lori Sjoberg is coming soon and I'm bringing you the reveal of her extra sexy, fantastic cover. 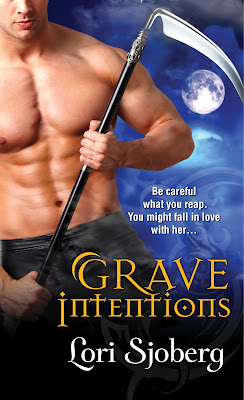 Oh yeah, isn't it magnificent :D I myself think it's pretty nice. ;)

Here's a little blurb for you:

He’s handsome, reliable, and punctual—the perfect gentleman when you want him to be. But this dream man is Death’s best agent—and now he’s got more than his soul to lose…
One act of mercy before dying was all it took to turn soldier David Anderson into a reaper—an immortal who guides souls-of-untimely-death into the afterlife. But the closer he gets to atoning for his mortal sin and finally escaping merciless Fate, the more he feels his own humanity slipping away for good. Until he encounters Sarah Griffith. This skeptical scientist can’t be influenced by his powers—even though she has an unsuspected talent for sensing the dead. Her honesty and irreverent sense of humor reignite his reason for living—and a passion he can’t afford to feel. Now Fate has summoned David to make a devastating last harvest. And he’ll break every hellishly-strict netherworld rule to save Sarah…and gamble on a choice even an immortal can’t win.


Sounds awesome, right? Yes, of course it does because it is :P

Here are some social media links for Lori:

One more thing that Lori would like to add:

Thanks so much for hosting my cover reveal, Kela! You've been a great friend and a great supporter, and I really appreciate you taking the time to promote Grave Intentions, scheduled for release on January 1, 2013. Now let's get you published so I can return the favor!

Thank YOU so much, Lori. You're an amazing woman and I'm glad to know you. I'm so happy that you're being published, it's VERY well deserved.

I hope you all enjoy the cover, and please do remember GRAVE INTENTIONS out Jan 2013.

Posted by Kela McClelland at 4:30 AM

I find it humurous that a lot of romance books, either paranormal or otherwise always have a man on the cover with rock hard abs.

I'll be seeing you around. Cheers.

Thanks! I hope you enjoy reading it as much as I enjoyed writing it! And a big thanks to Kela for hosting my cover reveal! You're the best!

Agree with Jeremy - and wish I looked like that!