Well, there were some ups and downs to this week, but I prevailed enough that I'm going to call it an awesome week.

The downer to this week was when I got a call from my daughter's (the one who's five) school asking me to come in for a conference....

Just the day before that phone call, she'd come home with a red day (they either get a green, yellow, or red-in order of good, warning, bad). She got the red for throwing dirt in another little girl's face....

The Friday before that, she'd come home with a red day because she drew an A on the smart board in her classroom....

So, you can imagine how I was feeling when I got that call. I went in and she was sitting in the counselors 'waiting room' outside of her actual office. The counselor told me it'd be just a minute so I sat down and asked my daughter why she though I was there. My little angel proceeded to tell me it was because she told someone she was going to slap them (though I learned later-from her- that I'd heard her wrong and she didn't say slap, she said stab). Yep, my sweet angel. Riiight.

The conference was 'called to order' and they took me into a room with the counselor, my daughter's teacher, and another teacher. They each had a page-long list of everything she's been doing wrong. And apparently she's been a mouthy little angel everyday for the last two months (on top of the destructive, hurtful, mean, and defiant behavior). Then they went on to ask me if I have any suggestions *insert accuse me I'm one of those moms that let their kid act horrible and just get away with it* for why she's doing this. Of course, I have theories, but in reality I didn't realize she'd been being 'so bad' for all these months. They said I need to do something to fix it before next school year. *Insert 'Imagine that' or possibly a 'No shit?'* I mean, obviously she can't act up like that, I don't need someone to tell me. But I do need someone to let me know she's acting crazy so I can talk to her about it.

Now, I'll move on to my ups because from my downs it doesn't seem like I had such an awesome week, but I did.

I finished the latest pass in my revisions, and will be starting another go round sometime this weekend. I also worked on my WIP and have been making a bit of progress there. I critiqued and received crits. I also tweeted with some awesome people, had some of my tweets retweeted and favorited, and I...well, I don't know, but it was a good week.

I even got another award! :D 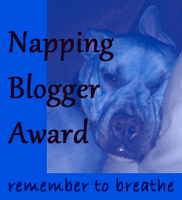 I received the Napping Blogger Award from Donna B McNicol (who also created this award). Make sure you stop by her blog and check her out because she's a whole lot of awesome.

1. Link back to the person who gave the award (in this case Donna, which I already did)
2. Name something you do to take time for YOU.
3. Nominate five other bloggers-especially someone you think needs a break from their routine.

So, something I do for me. I've been working on doing more for just me. Lately it's been allowing myself to take a nap (isn't that fitting :p ) and not being mad at myself when I wake up. It's a difficult thing for me to nap when I have things I could be doing instead. I also like to write - stories and poems. Sometimes I turn on some music and dance around really silly just for fun.

1. Alex J Cavanaugh because he's full of awesomeness and I think he deserves a good nap. (Yes, it's possible he's already got the award because of his awesomeness, but I nominate him anyway.)
2. Jean Oram because she's full of awesomeness and does so much that I'm sure she could use one too. (I know she may not post awards, but I'm giving it to her anyway :p )
3. Caterina Torres because she needs an award and a good nap.
4. Eden Baylee who has been running the campaign for Joshua (Indies Unite for Joshua, I talked about it here. And if you look to the right side (and a little up) of my blog, you'll see the campaign was a great success!) and she definitely deserves a nap for her awesomeness.
5. Cherie (who's recently landed herself an agent!) which also means she deserves a good nap too.

Thanks again Donna and thanks everyone for stopping by.

Happy Napping :D
Posted by Kela McClelland at 5:30 AM

Sounds like you need to have some better communication from the teachers! Hopefully you can get it all straightened out!

Great choices for your award pass- along! Those are all awesome people!! :)

Thank you, Kela - I don't have that award!
I hope it goes well with your daughter. I'd be frustrated as well that no one told me it had been going on for months.

Jemi-Thank you, I hope so.

Alex- YAY! I wasn't sure with your awesomeness and all, so I'm glad you didn't have it yet. :) And thank you about my daughter, it is extremely frustrating.

Thanks Kela for the award, and you woke me up from a nap to read this ;) haha, I need about 3 days of sleep straight but that's not happening.
I'm sure things will get better with your daughter now that you KNOW about it. Can't understand why they took so long to tell you.

As I say with other bloggers who've given me awards - I sincerely appreciate it, and the best part is learning more about the person who gave it to me.

Aw. Thanks. I love the idea of a napping blogger. And yeah, I have been thinking about the fact that I am trying to do too much lately. And then... I read this book on creativity and business and he said there is never a better time to be overextended! (As in trying to do too much.) Oh well.

I am trying to chill a bit more. I'm beta testing an Android app where you map out playgrounds--locate them on a map and take photos of them a rate them. It's for KaBOOM! and I love it! It's so much fun. I pop the little guy in the bike trailer, the big kid on her bike and off we go! It's supposed to rain today which is disappointing. I want to bike to more playgrounds!!

You know what Kela? I think I'll blog about this next week... after I have a nap.

P.S. You girl sounds spirited. She's not going to take sh*t from anyone and I love that. She's just got to figure out how to balance that with playing by those danged rules those adults have. ;)

Sounds like your girl can take care of herself. It will come in handy when she's older. For now, grown-ups will regard her as too spirited or too willful, but really, the traits that make a child sort of "difficult" in the early years will help them survive better when they're older and out into the world. So not necessarily a bad thing... :)

Anyway, THANK YOU so much for thinking of me! I love naps. Hehehe! Lately, I've been napping a lot because I'm in my third trimester. Maybe my body is gearing up for when baby comes and all those sleepless nights ahead of me. :)

I hope things get straightened out for your daughter. That all sounds pretty frustrating! Congratulations on your award.