Usually when I figure out what to post for Mention Monday, it just sorta comes to me. This time, I couldn't really pin point what I wanted to mention. So, I decided to do something I don't normally do...

I'm going to mention some non-writerly people. They're writers in their own way, but not authors exactly. Also, I know of them because of YouTube, so while they do write, they also vlog. And the vlogging is a main thing. I know a lot of people who follow my blog are writers, so forgive me if y'all don't want to hear about YouTubers. These are some people who either make me laugh, sing lovely, produce awesomely, and all (or close to) the above.

First there's Shane Dawson. I honestly couldn't tell you exactly what it is that makes me want to watch every video his posts, but I do, every time. He actually recently made an announcement that he sold a TV show idea to NBC, so that's pretty awesome. He's got a couple YT channels, so click his name and check him out.(His other YT channel is here)

Now I'm going to group a few people together here because they're all wonderful singers. I love pulling up their YT channels and listening to their covers of songs and then I go buy their songs on Amazon. They all sing lovely and it's inspirational for me...Andrew Garcia, Chester See, Andy Lange, and Josh Golden.

Okay, now this guy I'm about to mention may not be to everyone's taste. If it's not something you like, sorry I suggested you check him out, but still do because you may like him as much as I do. The name is Bart Baker. He does parodies and they make me laugh every time. They're actually pretty catchy too. I love wandering over to his YT channel each Sunday to see what new thing he's got for me.

I'm throwing NigaHiga in here. He's got over 10 million subscribers, so there's a chance some of you all already know of him and watch his videos, but just in case I wanted to mention him. He posts some pretty entertaining videos.

Last, but not least, there's Goopery(AKA Luke Twomey). I found him once when I was looking for Irish accents. And I love his accent, it's very inspirational for me since I've got a lot of Irish characters in my stories. But that aside, he's funny and he says what he says and doesn't give a crap. I like that. He doesn't post regularly, but he does post when he can and you should check him out.

That's it for this week's mentions. A little different, but hopefully y'all will find some entertainment in these people. Maybe you already know of some of them.

Either way, happy Monday! I hope you all had an awesome weekend and it continues into this week. If your weekend wasn't so awesome, I hope you have a week that makes up for the lack of awesome. :)

Posted by Kela McClelland at 4:30 AM 2 comments:

Mention Monday Is (Not) Going Thru Hell ;)

I vaguely remember the moment I 'met' this person. If memory serves me right (which, we all know it does not do most of the time...) it was on Twitter. I'm fairly certain I said something about where I live and she replied something about how she'd just moved from here. The back and forth on Twitter was extremely short lived, maybe five messages tops, but I've thought of her as a friend ever since. (Maybe I'm a weirdo creepy stalker-like person who has made up this sorta-friendship that's not real at all...) Oh well, I can handle that. :P

Anyway, now she's self-pubbed and out and about all over social networks so much that I felt I needed to put her awesomeness out in the open for anyone who doesn't know her...

So, today's Mention Monday is all about author/editor, T.J. Loveless. When she's not working as an editor, or plotting out new ideas for her characters that are probably lovingly (or not so lovingly ;P ) abused quite frequently, she's (from what I see) a wonderful, loving mother and wife (to a pretty awesome daughter and hubby as well, from what I've seen on FB). TJ works her butt off and whether it's true or not, she appears to keep her shit together very well.

One I decided to make her my mention today, I realized just how much I admire her. TJ finds time to help other writers, work on current editing jobs, check out blogs, write blogs, write books, publish, guest blog, promote her books as well as fellow authors, check and reply to people on Facebook and Twitter, all while being a wonderful friend to many online people she does or doesn't really know...But what makes her truly awesome is, she does all of that while being a mother and wife, two very demanding jobs alone.

She does all of the above and does it with a smile (most of the time). She's exceptional and very deserving of a mention.

If you don't know her, you should. Here are some links to get to know her:

There's a good chance I'm missing other ways to find this awesome woman, but these'll do I'm sure. So, go check her out if you haven't ever and if you know her, keep checking her out and supporting her because she's awesomely awesome.

Happy Monday! Hope you all had a great weekend and are having a wonderful start to the week. :)

Posted by Kela McClelland at 4:30 AM 2 comments: 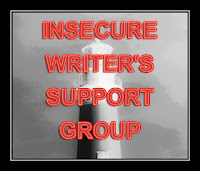 And here we are at yet another first Wednesday of the month. I'm happy to write this post today because I am finally really back on track. Yay!

Crits are caught up, writing is happening (partially thanks to NaNoWriMo which I'm participating in again this year), and editing is coming up soon(once I decide which story I want to revise first). Plus, I've got my blog schedule all worked out and beginning next week, I've got some posts all lined up and ready to go. I was going to get it running a couple weeks back and decided I wanted to get caught up on everything else first.

Now that I am all caught up and back on track, reading blogs and jumping back into social networking will follow.

And then I'm going to keep moving day by day, always worried that I may regress back to where I've been this past year. Always in fear that I will fall behind on everything, not reading, not writing, slowly losing myself...And it'll be okay, I'll be okay. I don't want to lose that worry, because without it, I may forget that feeling of being lost. I may forget myself, losing myself again and that's what will trigger the drop right back into the mess I was.

The worry will keep my insecurities at the front of my mind and I'll just have to make sure it fuels my determination to stay on track. But I've been on this roller coaster long enough to know that insecurities are a necessity. Because if you're never insecure, how do you know what it truly means to be secure? It's just like being successful, if you don't know what it feels like to fail, you can't appreciate that feeling of succeeding. And being the overly emotional person that I am, I like to feel and appreciate it all.

So I'm going to wrap my insecurities around me, then secure them and myself.

Happy Wednesday. I hope you're all having a wonderful week. :)

(Don't forget to check out Alex J Cavanaugh, along with the new IWSG website and Facebook.)
Posted by Kela McClelland at 4:30 AM 3 comments: