O.M.G. You have NO IDEA how excited I am about today's TAG! I'm giddy, yes, giddy. Because he's one of the most awesomest of awesome people I know. Yes, that's right, my TAG! today is...

The AWESOME ALEX J CAVANAUGH! (WOOT!) Now, for those who don't know this awesome man, Ninja Captain, blogger, and author...YOU MUST! Follow him on his blog, Twitter, Google+, and Goodreads. Read his books: CassaStar and CassaFire. (CassaStorm will be book three). He's the most awesome blogger buddy, friend, author, and person! His awesomeness can't be defined, it's nearly impossible to match, it's just...AWESOME! I could go on and on, but I won't. Let's just get into the interview.


1. When did you start writing?

Wrote some as a teenager and picked it up again a few years ago.

2. What made you want to write?

There were adventures I wanted to experience that I hadn’t read or seen in a movie yet.

3. When did you decide you wanted to write to be published? (As opposed to writing just to write)

After I re-wrote CassaStar, I decided to submit it and see what happened.

Because it’s the one I enjoy the most. And I’m not sure I’m ready to tackle fantasy yet.

6. Do you have any particular ritual when you write? (A specific way things are done during the process)

Only that I prefer to play music in the background.

7. Do you use an outline, or do you just start writing?

I have to outline! Otherwise my story would wander off and get lost.

8. Is there something you MUST have when you're writing? (Aside from the typical writer tools-computer, pen, paper, etc)

9. Do you write out your story on paper and then transfer to a computer, or straight to the computer?

I’ve done both. I neither write nor type fast, but after my experience with NaNo 2010, I do better typing. (I’m currently participating in BuNo this month and typing as fast as I can.)

10. How many books/short stories have you written? (Published or not, even those you wrote and then thought-what the hell?)

I wrote some short stories when I was younger and one incomplete novel. I eventually rewrote that novel and it became my first published book, CassaStar. The sequel, CassaFire, came out this past February.

11. Is there, or has there been, anyone in your life (real or online) who thought you being a writer is/was just another hobby? Or that you are/were wasting your time as a writer?

No one beside myself - I’m my own worst enemy.

I’m on Twitter, Google+, Goodreads, and I blog. That’s more than enough!

13. Any advice for writers that makes you cringe every time you hear it? (I know there is some cringe-worthy advice still worth following, so only advice you don't follow.)

I don’t think I follow any that are cringe-worthy. They always say don’t use italics to designate thought, but I use it to signify a character’s thoughts when he is speaking telepathically.

14. Where did your inspiration for CassaStar come from?

From watching a lot of science fiction movies and shows like Battlestar Galalctica, Star Wars, Buck Rogers, and Star Trek

15. Have you always been a Sci-Fi lover?

For as long as I can remember!

16. What was the first video game that you bought with your own money? (Earned money from doing chores or money that was given to you as a gift)

Atari’s Adventure. (Yeah, remember that one?)

17. When did you first become interested in learning how to play the guitar? How long after that did you become a fairly good player?

I’ve played other instruments and picked up the guitar a few years ago. How long before I became a good player? Hmm, maybe next week!

18. How are you able to have your normal life, your writer life, your blogging life, and still be such an AWESOME Ninja Captain and person?

Ninja skills! That and I blog from work. I try to be awesome all the time though.

Playing my guitar, watching movies, reading, and spending time with my wife.

20. Any words of wisdom for anyone who is thinking of becoming a writer, or just something you think all writers should know?

Just be a genuine, caring person – and be open to all possibilities!

( Alex J. Cavanaugh has a Bachelor of Fine Arts degree and works in web design and graphics. He is experienced in technical editing and worked with an adult literacy program for several years. A fan of all things science fiction, his interests range from books and movies to music and games. Known online as the Ninja Captain, he’s the founder of the Insecure Writer’s Support Group. He lives in the Carolinas with his wife. )

Check out his books: 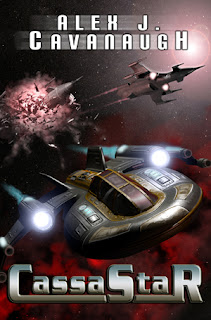 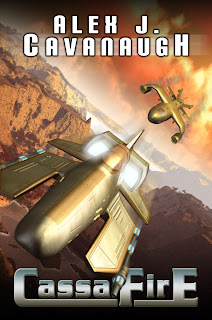 Posted by Kela McClelland at 3:30 AM

So nice to see you here and learn more about you. I like your line "There were adventures I wanted to experience..." That's truly writing from the heart.

And thank you Kela for the opportunity and the wonderful introduction.

Nice to learn more about you Alex!I have to outline too. I have many a story lost out there in the wilderness from before I learned that!

Nice interview! It's always good to know more about the Ninja!
Heather

Great interview with the Ninja Captain.

Great interview, Alex has been so kind to me over the few years we've been blogging friends, He is one in a million.

Vik, they get lost, they never come back...

Loved getting to know him better. I can never get enough! Great interview Kela! :)

Awesome! Great interview! I agree about the outlining too; it's such a relief knowing that I know what will happen next. Of course, I allow for a LOTT of freedom, but the outline is a lifesaver :)

I followed the link here from Alex's blog. Love this place! And great interview, Alex.

Great interview! I wish I could outline, but it just doesn't work for me - somehow takes all the fun out of it and my creativity dries up! :)

It's great to get to know a bit more about what makes him tick!

Good interview. I always outline, too.

You did a great job getting our favorite Captain, to reveal even more. Other instruments...?! Do tell...lol I have always wanted to play the piano. A ninja on the piano would so rock! ;D

And Ella, I used to be really good at trumpet.

It was great getting to know the man behind the ninja mask! :)

So nice to meet you :) I came over from Alex's blog! This guy really does have ninja captain skills. I wish I had some, too, but I'm happy just to be part of the ninja army. Thanks both for this great interview... he is no longer the man and the mystery. He's the man and a little less mystery.

Alex- Thank you again for doing this and you're welcome as well. :)

Yvonne- He is definitely one in a million. :)

KarenG- Thank you (for stopping by, loving this place, and following). :)

Julie- Nice meeting you as well. :)

Thank you everyone for coming by. I hope you all have an awesome weekend. :D

Julie, thanks so much! You rock!

Good stuff. I do outline but I've gone way off it on my WIP! I'm sort of always outlining in my head now.

I THINK I followed his blog... YAY FOR ANOTHER OUTLINER! Alex knows where it is!! :D

Great interview! I love Hot Tamales too.
Alex, why no Facebook? Which part of NC?

I love your final advice!

Kendra, outlining is the only way to go.

Heather, no Facebook! And very near the center of NC.

Great interview! Blogging from work, I wish I could do that more. Always wonderful to learn a little bit more about the Ninja Captain. :)

I'm glad I stopped by. I learned more about Alex. I also like classic sci-fi movies and shows; I don't remember if I had that Atari game or not.

Great interview.
I use italics for internal thoughts and I have learned to outline a lot more than before.
Which you had asked him about the other instruments, drums?

I have chocolate, Alex has hot tamales. lol To each his own!
Nice to meet you Kela! :)You're right, ALex rocks!

Hey Kela,
You can relax, for I have, as promised, come over to your blog from that incredibly famous writing celebrity, the one, the only, Alex J. Cavanaugh!
A captivating and enlightening interview you had with Alex. The man has the endearing qualities of being sharing and caring. I like that.
And now Kela, to make you smile even more, I have decided to link into your site and learn a bit more about your good self. I'm famous, but it's a well kept secret:)
Happy, fulfilling writing to you.
In kindness, Gary :)

Thank you so much, Gary!

I also came over from Alex's place, and I really enjoyed the interview! You asked great questions, and I especially liked Alex's response about his guitar playing! Julie

Hopped over from Alex's place. I agree, he is awesome! Thanks for a wonderful interview!

Thanks, everyone. And big thank you, Kela!